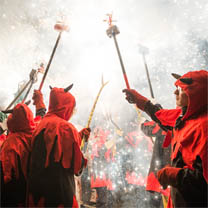 The correfoc is a form of street entertainment where the public interact with fire and devils. Generally these "fire runs" take place in the late evening, follow a set route and involve other festival figures as well as the devils, mainly dragons. The diables carry all sorts of firework launchers, such as the revolving carretilles, vertical francesos, fixed sortidors and cartridges, which they "burn" as they make their way round. Onlookers play a sort of tug-of-war with them: they chase them, dodge them and take shelter from their fire.

It is said that the correfoc developed spontaneously in Barcelona during the La Mercè festival in 1978. That was a time when traditional and popular culture was being revived and a group of cultural activists, along with some members of the Comediants wanted to organise a fire show. The initial idea was to organise a classic ball de diables but, to their surprise, the watching public joined in the performance and gave it movement.

Since then the correfoc has become an essential part of many festivals around the country. Most are aimed at adults but in lots of places, Barcelona included, they hold one for children. To take part you need to respect basic safety rules, such as wearing protective clothing and avoiding unnecessary risks.