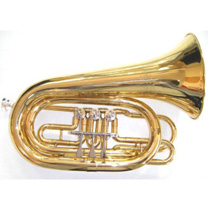 The fiscorn has the deepest sound of all the brass instruments in a cobla. It is similar to a trumpet but slightly bigger and not as strident. Usually it has three valves and a hemispherical mouthpiece, like horns. It is a typical band instrument and forms part of the cobla in Catalan-speaking lands.

The fiscorn appeared in Catalonia when the traditional cobla was changing under the influence of Pep Ventura, in 1850. He added other new instruments, for example, the cornet and the double base. Other changes included improvements to the oboe-like tible and the bagpipes finally being abandoned in favour of another wind instrument, the tenora.

Today's cobles have two fiscorn players. Like all the other brass musicians, they stand in the second row. As they are arranged according to the sound of the instruments and the fiscorn has one of the deepest, they are on the right.