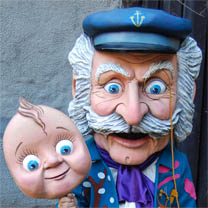 Right at the end of the year there are more fantastical figures abroad than at any other time. Of all this fantastical crew, the Home dels Nassos, the Man of the Noses, is the most mysterious and least known of all. Even though, when we were kids, we often used to go out looking for him, urged on by our mother, father, or another adult.

On the last day of the year, children are made to believe that in the streets they will find a man "with as many noses as there are days in the year". This, of course, means one, but the little ones do not see the trick, and look for a strange, perhaps even monstrous gentleman. No doubt you are already thinking what a tough life, blowing 365 noses.

According to Joan Amades, in Barcelona it was traditional to find the Home dels Nassos at exactly midday in Pla de Palau, in front of the Llotja exchange. He would be perched on top of a scaffold so everyone could see him, with a few dozen sheets to blow his 365 noses (which inevitably had to be spread all over his body because they could not all fit on his face).

There are currently several places, including Reus, Flix and Barcelona, where this character is represented by a capgròs, a big-headed festival figure. Barcelona's Home dels Nassos delivers the key that opens the door to the New Year to the authorities, while also acting as a messenger for the people because he reminds those in charge of the citizens' wishes.

In some homes, they delegate the job of giving toys to the children to this character, avoiding the foreign figure of Father Christmas and, for whatever reason, the Reis (Three Kings) tradition. Often it is for practical reasons or family logistics.

The Home dels Nassos is one of the allegorical characters of our imagination, most likely a memory or an evolution of the god Janus, who had two faces, and also related to the figure of Fumera. Here we ought to mention the Home de les Orelles, the Man of the Ears, a figure directly derived from the Home dels Nassos, who is abroad on 30 December and who has as many ears as there are days in the year.