Legend of Santa Eulàlia of Barcelona 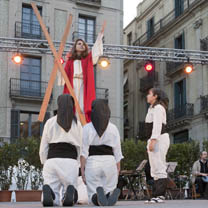 St Eulàlia of Barcelona's existence as a historical figure is doubtful. Everything points to her being the result of a well-known phenomenon where saints have doubles. In this case, it is likely that the saint from Barcelona is the double of Santa Eulàlia de Mèrida, as their biographies and martyrdom are very similar to one another.

The legend around the saint came down to us orally, until folklorists at the end of the 19th and beginning of the 20th centuries wrote it down to save it from oblivion. Here we focus on the versions gathered together by Joan Amades.

Broadly speaking, the legend tells of the exemplary life of a thirteen-year-old girl called Eulàlia, whose name means "the well-spoken one", as she faced one of the last persecutions of Christians by the Roman Empire at the beginning of the 4th century, in the time of the Emperor Diocletian. Eulàlia met the attacks of the governor, Dacian, with words and reason, and never faltered in her Christian faith. The story goes that as a result of this determination she was subjected to thirteen horrifying agonies, some of a sexual nature. The saint was finally crucified, naked, on a saltire, or St Andrew's cross. This is why she is represented with a palm in one hand, which identifies her as a martyr, and a cross in the other.

One of the features of the legend is that the events happen in places that we can recognise today, and which still exist in the city. So Barcelona has a fair number of places related to Eulàlia, like the Desert de Sarrià, Plaça del Pedró, the Pla de la Boqueria, Carrer de la Boqueria, Carrer Volta de Santa Eulàlia, Barcelona Cathedral, Pla de l’Àngel, Santa Maria del Mar, Portal de l’Àngel, and so on.

The legend of  Santa Eulàlia