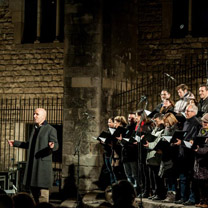 Nadales are traditional songs, like carols, that refer to Christmas (Nadal) or winter in general. According to Joan Amades, the cançoner nadalenc, the Christmas song book, is one of the most extensive in the entire repertoire of popular Catalan songs. In fact, if we think for a moment, their names are easy to recall: El desembre congelat, Frozen December, El rabadà, The Shepherd, Les dotze van tocant, Twelve were playing, and the list goes on.

Some of the oldest melodies are documented from the 15th century. It is likely that the nadales originated from the Christmas Eve performances that the shepherds gave in the doorways of the churches.

There are many kinds of nadales: some come from religious music, such as Santa Nit, Silent Night, and other are cradle songs, like El noi de la mare, the Son of the Mother. There are some which are typically for kids, like Fum, fum, fum,  Smoke, Smoke, Smoke, and El dimoni escuat, which sings of a tailless demon. Finally, there are nadales that have been converted into anthems, as is the case of El cant dels ocells, the song of the birds, an anonymous song internationalised by Pau Casals.

The nadala genre is very much alive, and new songs often appear thanks to all kinds of musical groups with different styles. Around Christmastime they are sung in choir concerts, schools, and in homes around the pessebre, the nativity scene. One of the best-known nadala recitals is the Concert de Sant Esteve, which each year is performed by the Orfeó Català in the Palau de la Música.