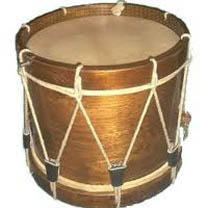 The tamborí is a percussion instrument between eight and twelve centimetres in diameter and played with a single drumstick. In the cobla music group, the sound of this instrument accompanies the flabiol flute and marks time for sardana dances. The unusual thing is that a single musician plays the two instruments: they hold the flabiol in the left hand, the tamborí is hung from the same arm and it is struck with a drumstick held in the right hand.

The tamborí is made of a cylindrical, wooden or metal resonating chamber covered by a skin membrane stretched tight by tuning screws. The size of the instrument has varied greatly over the years, depending on the time and place. But it is known that in the past it was bigger. From time immemorial, it has been the bosom buddy of the flabiol, used by shepherds and Mediaeval minstrels.

The duet of the tamborí and flabiol came to form part of the cobla de tres quartans musical arrangement, together with the oboe-like tarota and the cornamusa bagpipes. It remained in the cobla when the group was rearranged by Pep Ventura in the middle of the 19th century. These days the tamborí is the only percussion instrument in the entire set up. Within the cobla, the musician playing the tamborí and flabiol sits on the left-hand side of the first row.