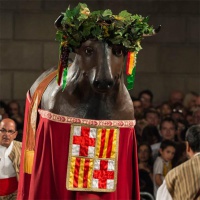 Built in 1993 by
Manel Casserras i Boix

The Barcelona Bull represents a calm and docile figure, in contrast to the role it plays in some other Catalan towns. It plays a double role: you can see it at official events with the Barcelona giants' retinue (seguici), wearing a crown of wild flowers, as well as in the fire runs (correfocs), showering sparks from its horns.

The Bull's origins probably date back to the animals that represented the four Evangelists in the Corpus Christi procession, along with the Lion and the Eagle, and was a reference to St Luke. Other sources point to an entremès, a one-act play that represented the Nativity. Either way, these figures originated in the Middle Ages, when they took part in the Corpus Christi procession to explain the Holy Scriptures to the people on the streets, who were generally illiterate.

It was a tremendously popular figure in the first centuries of its existence but its popularity declined in the 18th century, due to the restrictions that limited its privileges and spheres of activity. The royal decree issued by Charles III in 1780 also restricted the performance of festive entremesos during processions. As time went by the Bull lost its fame and symbolism and the last reference we have to it relates to a celebration to mark the end of the Seven Years' War, in 1839.

The Bou de Barcelona we have today dates from 1993 and was built as part of the process to reclaim the city's festival imagery. The Friends of the Raval Giants Ramon and Lola were responsible for that, giving the job to the master image-maker Manel Casserras i Boix. The Bull first appeared in 1993 and immediately joined the giants' retinue, the Seguici Popular de Barcelona.

It has its own dance called, simply, the "Bull's Dance", a piece by Isidre Peláez i Dulcet first played at the Toc d’Inici, the opening dance of the La Mercè festivities, in 1994.

It can be visited throughout the year, except when it's out somewhere, at the Casa dels Entremesos, along with a good many other old-town Barcelona figures.