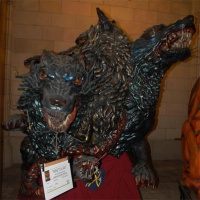 The Bretolàs (wicked creature) represents Cerberus, the mythological three-headed dog that guards the entrance to hell. It belongs to the Satànica de Sant Andreu, a group of diables, diablons, tabalers (devils, little devils and drummers) and bretolassos, the carriers of this fire beast, who have been going since 1987.

The two carriers move it around to scare the watching public and play with the fire shooting out from 13 different points on its body.

The initiative to make it came from the Satànica, because they wanted a figure to accompany and liven up the performance of the diables. They gave the job to the Vilafranca del Penedès sculptor Dolors Sans, who finished it in early 2006. Its first appearance was on 10 June that year, at the official opening of the Centre Municipal de Cultura Popular de Sant Andreu, and since then, it has never missed the Satànica's pyrotechnic displays or correfocs (fire runs) where it is accompanied by the devils and drummers.

It plays a very important role in the Sant Andreu de Palomar festive calendar, taking part in the top popular culture events during the neighbourhood's annual festival, namely the Esclat Andreuenc and the correfoc, as well as hosting the Tres Tombs Infernals, a fire run created by the Satànica group and performed every January since 1992, during the Sant Antoni festivities.

When not out somewhere, the Bretolàs de Sant Andreu can be seen at the Centre de Cultura Popular de Sant Andreu, where it is on display.