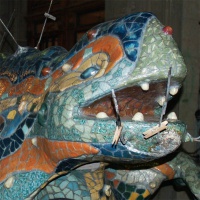 Gaudiamus represents Antoni Gaudí's dragon at Park Güell, for sure the best-known image of the Coll neighbourhood. This is an innovative figure because it is very different from the typical beast of Barcelona's festival imagery, with a body covered in Gaudí's trencadís mosaic.

The idea for the dragon came from the Malèfica del Coll, the local colla de diables, or devils, who wanted a fire beast that could be identified with the neighbourhood to liven up the correfocs and cercaviles, the fire runs and street parades they took part in. They contacted the artist Dolors Sans, from Vilafranca del Penedès, and she made it in 1999. Gaudiamus was presented to the neighbourhood on 5 June that year in a performance at Park Güell imitating the birth of the new dragon.

You can see it in various correfocs and pyrotechnic displays, accompanied by the diables and other members of the group with different roles. There are two portadors (carriers) that move the dragon and make it dance; the pastor (shepherd), who guides and gives instructions to the carriers; the civaders (nosebags), who put the fireworks on the dragon and remove the burnt ones; and the carro (cart), as the person who carries the pyrotechnic material is called. The dragon also takes part in cercaviles where there are no fireworks, when it is only accompanied by the portadors and the pastor.

Gaudiamus plays an important role in the Gràcia festival calendar but can also be seen in other city neighbourhoods, taking part in correfocs, cercaviles and trobades (gatherings) of dragons and other figures, dancing to the drumbeat of the tabalers.