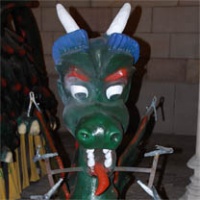 Jussà is a children's fire beast that is carried by the youngest members of the  Drac d’Horta-el Carmel group. It is in the shape of a traditional dragon with bright colours and childish features, and its construction was based on Capallà, the neighbourhood's dragon.

Jussà d’Horta was born in 1998 thanks to an initiative of the colla de diables, the devils' group, who wanted a fire beast that their youngest members could take out into the cercavila parades and firework shows.

The little dragon, together with the devils and the group's other pieces of festival imagery, is very important in the neighbourhood's festival calendar: he takes part in the most well-known popular culture events during the festes majors, the main festivals, in Carmel and Horta, and each year he participates in the most important of Barcelona's festivals, La Mercè and Santa Eulàlia. On top of this he can be seen in gatherings of children's groups and correfoc fire runs in the city, to which he is invited.