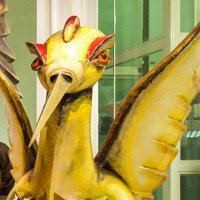 The Phoenix belongs to the Colla del Drac del Poblenou and represents the bird of thousand-year-old legend, a symbol of rebirth after death, arising from its own ashes. Even though it showers sparks, it is not a correfoc figure.

The Phoenix has been found in popular and festive imagery for centuries. They say that a figure with that name was taking part in solemn acts in Barcelona all the way back in the Middle Ages, which is why the Poblenou colla decided to bring it back.

The new bird was based on a design by Manel Ollé, an artist and a member of the group who has thought up all the beasts in their parade comparsa. He made it with Joan Carles Soler in 2011. It first appeared in November that year, in a ceremony with a performance representing the birth of the Phoenix, which came out of an egg. Since then it has danced in the main events on the neighbourhood's festival calendar.

The new Fènix, or Phoenix, is the star of a festive event created by the Poblenou colla , which is linked to the symbolism surrounding the bird – rebirth, renewal after a life cycle, etc. – and is performed every year, two weeks before Christmas. It starts with the "Cercavila de la Mort" (Parade of Death), which goes round the neighbourhood streets to Mar Bella beach, and represents the bird's death and rebirth with a music and fire show. And for this it has several tunes of its own: "Toc d’inici", "Renaixement de les cendres", "Cercavila" and "Ballada de lluïment" (roughly, the start, reborn from the ashes, the parade and the dance of the glowing Phoenix), composed specially by Ester Vela and played by the Colla del Drac's grallers, or shawm players. The carriers and dancers created the choreography.

When it is not out and about, you can visit the Phoenix at the Centre d’Imatgeria Festiva Can Saladrigas, where it is always on display with the other Poblenou figures.