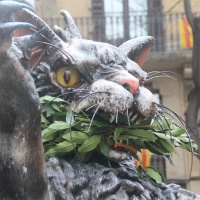 Sírius is a fire beast belonging to the Diables del Poble-sec. It represents a wild cat poised to attack, with eyes that light up at night and make it look even more aggressive. It can also shower the public with sparks emitted from nine points on its tail and legs. Sírius is accompanied by devils and drummers in the festival correfocs (fire runs).

This cat is associated with the Cat Fountain on Montjuïc, a typical feature of Poble-sec. According to neighbourhood legend, witches used to meet at the fountain and organise sabbaths. That's why Sírius carries a figure on either side of its back: a witch and a he-goat, which presided over the sabbaths. They are tied together by a chain that goes over the cat's back.

The idea for this figure, made by the artist Dolors Sans, came from the Diables, who wanted to add a festival figure to the pyrotechnic displays they organised. It was presented to the neighbourhood in the autumn of 2012 and, since then, it has taken part in all the activities of that colla, where it is moved around by one person.