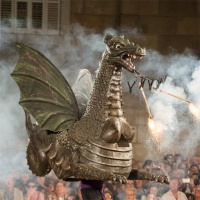 Built in 1993 by
Xavier Jansana

The Víbria of Barcelona is a medieval mythological figure representing a wicked, female dragon with a snake's tail, bat's wings and woman's breasts. It is one of the city's mythological animal figures and forms part of the giants' retinue, the Seguici Popular de Barcelona, taking part in official acts and street parades as well as correfoc fire runs.

There is documentary evidence of it as early as the 15th century, when it used to take part in the Corpus Christi processions and ceremonies to welcome important visitors to Barcelona, such as Queen Isabella of Castile. There is also evidence that, like most of the historical figures, it took part in the festivities surrounding the canonisation of Ramon de Penyafort, in 1601.

The Víbria of Barcelona was hugely popular during those early centuries but in the 18th century, following the restrictions introduced by the Bourbon monarchy, it began to lose importance, notably after the ban imposed by Charles III's royal decree in 1780. By the 19th century there was no trace of the Víbria anywhere.

Then, in 1993, as Barcelona recovered and renewed its festival imagery, a festival association, the Associació de Festes de la Plaça Nova, decided to bring back the Víbria. That job was given to the image-maker Xavier Jansana, who had the new figure ready that year. It immediately joined the other historical beasts and the Seguici Popular.

Today's Víbria has its own dance, called simply the "Víbria's Dance", with music provided by shawms and drums. It can be seen at the most symbolic Barcelona festivals – La Mercè, Santa Eulàlia and Corpus Christi – in the dances of the other popular retinue figures.

When it is not out somewhere, it can be visited at the Casa dels Entremesos, where it is permanently displayed with a lot of Ciutat Vella's other festival imagery.