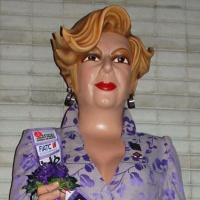 The female giant Núria Feliu is a very feminine figure dressed for a walk or to go dancing. She represents the well-known singer of that name from the Sants neighbourhood. She wears a long, purple skirt with a jacket the same colour, plus a necklace and a pair of eye-catching earrings that highlight her short, blonde hair, which is styled just like the singer's. In her hands she is holding a bunch of violets, the singer's favourite flowers, and the score of the "Sants Song", the most popular of her repertoire.

The idea for creating this figure came from Núria Feliu herself. She has always been a fan of giants and she had a double celebration coming up: her 70th birthday and 50 years in show business. So she got in touch with the master figure-maker Toni Mujal and he took on the job of creating a female giant from the drawings made by Cecília Vidal.

The big Núria Feliu was presented in September 2011 at a ceremony presided over by the "big head" Msgr Filomeno, the Sant Cristòfol Nen parish priest, and her godparents were the Gegants Vells de Sants, Bartomeu and Maria.

A year later little Núria handed giant Núria over to the Sants-Monjuïc district so she could be permanently exhibited and visited at the neighbourhood civic centre. Whenever she leaves the centre for an event or celebration, in the city or elsewhere, the Gegants de Sants colla are the ones who carry her round and make her dance.