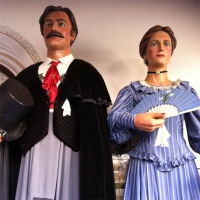 Built in 1982 by
Àngels Jutglar

Built in 1982 by
Àngels Jutglar

Pau and Llibertat, the Gràcia Giants, represent a bourgeois couple in nineteenth-century Barcelona. He has a black velvet cloak over his shoulders and a top hat in his hand, while she wears a blue dress, with a fan in one hand and a bunch of flowers including three irises in the other.

The names Pau and Llibertat were chosen through a vote among children at the neighbourhood's schools. "Pau" as a tribute to the mayor who achieved independence for Gràcia in 1887, Pau Fatjó. And "Llibertat" for various reasons: first, because the first town hall was in Plaça de la Llibertat; second, because it is a street that has always kept the same name, despite all the political changes; and, third, because it is a name that is very closely linked to the history of Gràcia's inhabitants and their fight for liberty (llibertat).

The Gràcia Giants, built by the Gràcia artist Àngels Jutglar, first appeared in 1982. They were very heavy figures so, a few years later, Dolors Sans made some lighter replicas, making use of the original wooden legs and clothes, and these are the giants you can still see today. In 2008 they were fully restored at the Sarandaca workshop in Granollers.

The Colla Gegantera de Gràcia, set up in 1990, immediately took responsibility for looking after them and taking them out to walk and dance on the appointed days. Until then, giant-carriers who were fond of them had taken them out when necessary, but no group was responsible for them.

Pau and Llibertat have their own dance: the Gambeto, or gala dance, because they also take part in the Toc de Gràcia, which all the Gràcia group's giants have danced at the neighbourhood annual festival since 2002. And in 2007 they unveiled a new dance to celebrate their 25 years in the Gràcia neighbourhood: the Courtship Dance.

Every year the Gràcia Giants can be seen on 15 August, the Feast of the Assumption of the Blessed Virgin, as the stars of the annual festival parade. In addition, every odd year, in the first fortnight of May, they hold their biennial gathering.