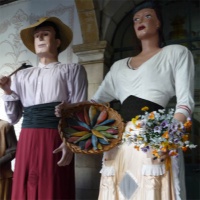 Magí and Quimeta, the La Marina giants, represent two of the trades associated with the old Marina de Sants neighbourhood: a farmer and a fishwife. Their accessories reflect their occupations: Magí has a straw hat on his head and a hoe in his right hand, while Quimeta is holding a basket full of fish.

Both were made in 1986 and were initially known as the Zona Franca Giants. They were created by the sculptor Xavier Jansana, who wanted to make them look more like comic book characters than the classic traditional giants. This was part of the movement to renew Barcelona's festival imagery in the 1980s.

After years of intense activity, which even took them to Japan, there was a long time when they were locked away and had no group to take them out because they were really heavy and very hard to carry.

Later some lighter copies were made and in the year 2000, on 8 September, they reappeared at the La Marina annual festival in honour of the Virgin of the Port. It was then they were officially named the La Marina Giants and a group of giant-carriers developed round them who still take them out and make them dance today. In fact, a few years ago one of the group, Joan Azorín, composed the music and choreography for Magí and Quimeta's dance.