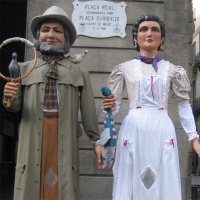 Pere the pigeon man is based on a real person who lived in the neighbourhood: Pedro Sampablo, a rover from Zamora who busied himself training pigeons. He called them by name and they would come and perch on a ring he had in his hand, which was very similar to the one held by his giant alter ego. Pepa the fishmonger, on the other hand, is a local woman whose cheerful face reminds you of the natural, friendly market traders.

Both are the work of the master giant-maker Domènec Umbert and they were unveiled in 1988 on St George's Day, which is when the Sagrada Família neighbourhood celebrates its annual festival. Since then they have never failed to appear for the important dates in the neighbourhood, carried by the local giants' group, the Associació Fal·lera Gegantera de la Sagrada Família.

In April 1995, they performed their own dance for the first time: the Cucurull. Magda Font, a member of the group, created the music and Gerard Balmaseda produced the choreography.

The Gegants de la Sagrada Família have performed many, many times, both in the city and elsewhere. One of the highlights was when they took part in an international folk fair, the Aplec Internacional de la Sardana i Mostra de Grups Folklòrics, which gave them an opportunity to make themselves known across Europe.