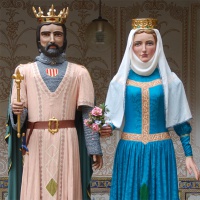 The Les Corts Giants have a classical appearance and they represent King Jaume II and his wife, Elisenda of Montcada. Their link with the old town of Les Corts is the Pedralbes Monastery. Consequently they are also known as the Pedres Albes Giants.

They grew out of the Anglesola Collective's "Una cercavila ben pròpia de les Corts" – A parade true to Les Corts – project, which aimed to create figures that could be identified with the neighbourhood. This won the "Faci d’alcalde" (Be the Mayor) competition organised by Barcelona City Council in 1987 to finance public initiatives.

Jaume II was made the same year by Barcelona's master giant-maker Domènec Umbert and presented at the Les Corts annual festival in October. Elisenda of Montcada was finished the following year and unveiled at the La Mercè festival.

The two giants were a new addition to the Les Corts festival scene and since then they have represented the neighbourhood all round the country and even abroad, on trips to Japan, Poland and Syria. They are always accompanied by the Associació de Geganters de les Corts, their current custodians.

Fibreglass replicas of the couple appeared in the 1990s. These were much lighter and built by Manel Casserras and Jordi Grau. Their clothes were made by the women who had made the clothes for the old giants.

These days the Les Corts Giants only appear sporadically but they never miss the Rosary Festival gathering and parade in Les Corts, their neighbourhood, where they are the hosts.