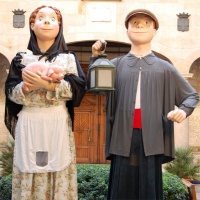 Tonet and Rita, better known as the Sant Antoni Giants, are a couple of adult figures, despite the childlike features of their faces. That makes them unique and flows from a change in the concept of giants.

Tonet is a carter from the end of the nineteenth century wearing a cap and a loose jacket, and holding a lamp in his hand. Rita is a trader at Sant Antoni Market, an iconic local building, cradling St Anthony's famous piglet in her arms.

The idea to build the giant couple came from a youth centre, the Casal de Joves Calassanç, linked to the Catholic school, Escola Pia. They wanted some figures to take part in the Sant Antoni Abat festival, the occasion for Barcelona's Tres Tombs celebration.

Àlex Massalles, Rita Culla and Joan Carles Montagut were given the task of making them and Tonet was finished first, appearing in the neighbourhood's annual festival in January 1989. A year later Rita made her first appearance at the same festival. Since then the couple have never missed it, thanks to their carriers, the Colla de Geganters del barri de Sant Antoni.

Tonet and Rita have had their own dance since 1995, which their carriers commissioned. The music was composed by David Puertas, to be played by shawm players and minstrels. The choreography is by Eduard Cerlós and Albert Ollé.