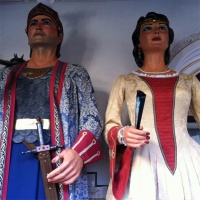 Built in 2010 by
Manel Casserras i Solé

Built in 2009 by
Manel Casserras i Solé

Ferran and Mercè are a couple of noble giants linked to the Sant Jaume Apòstol church, which used to be on Plaça de Sant Jaume. When that square was enlarged, the church moved permanently to Carrer de Ferran.

Their story begins in 2007, when a giant-carriers group, the Associació Gegantera dels Gegants de Sant Jaume, was set up with the idea of recovering some parish giants that were said to have existed many years before. Members of the group started looking for documentary evidence and this took them to the Sant Jaume parish archives and the Casa de l’Ardiaca, the Archdeacon's House. They could hardly find any information on them so they decided to build some new ones based on the archetypal image of Catalan giants: a man with a helmet and a cudgel, and a slender, elegant woman holding a fan and a bunch of flowers.

The designer and member of the Sant Jaume group, Martí Ribé, produced the sketch and the sculptor Manel Casserras i Solé was given the job of turning the idea into reality.

He finished the female giant first and she was presented in 2009, with the Gegants del Pi and the Gegants de Santa Maria del Mar acting as witnesses. She was christened Mercè, in honour of the city's patron saint. The following year, at the second Sant Jaume giants' gathering, it was the turn of the male giant, who was called Ferran after the name of the street where the parish is today.

Since then the group who carry them have taken part in the La Mercè and Santa Eulàlia festivals and, every year, they organise a giants' gathering on the Saturday closest to 25 July, St James' Day.