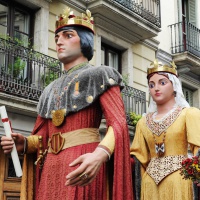 Pere II (the Great) and Constance of Sicily are the giants associated with the Sant Pere de les Puel·les parish. Their robes and accessories show they are a king and queen from the Middle Ages.

They were bought from the Barcelona shop El Ingenio at the start of the 1950s. Consequently they are of no great interest from a sculptural point of view. They are based on a standard model, like those of Banyoles, Falset, Olesa de Montserrat, Tàrrega and Tibidabo. Their main claim to fame among the city's giants stems from the fact they are some of the oldest still walking around with their original structure and with no protocols regulating when they go out.

There are many documented outings by the King and Queen (as they were known at the time) in the 1950s and at the start of the 1960s. They even took part in the parish Corpus Christi procession.

However, the couple had a very short public life to start with, because in 1964 they were shut away in the parish church. Although various neighbourhood groups and residents made efforts to recover them, the priest always refused and it has never been established why.

Following a change of priest, and at the insistence of local people, they were recovered in 2002 and restored by the Mataró artist Sergio Laniado, who kept their original painted image. It was at this time that the Colla de Gegants de Sant Pere de les Puel·les, the youngest group in Ciutat Vella, was formed and they gave the giants the names they have today: Pere II (the Great) and Constance of Sicily.

The two giants recently lost their original image, one of the last surviving examples from that period in Catalonia, because it was decided to restore them again and give them a new image, a task given to the master giant-maker Toni Mujal.