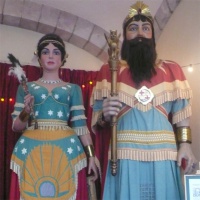 Rei Salomó (King Solomon) and the Reina de Saba (Queen of Sheba), representing a couple of Jewish monarchs, are the Santa Maria del Mar giants. These figures come from a long way back and the two we have today are based on information taken from Gegants, nans i altres entremesos (Giants, dwarfs and other festival figures), a book by Joan Amades. In fact, the original couple were the work of the stage designer Francesc Solé i Rovirosa. Their weight and size made them very difficult to carry so they were only taken out a few times. By the beginning of the 20th century there was no trace of them.

In 2002 the Colla Gegantera del Casc Antic decided to revive them and asked the Cardona figure maker Toni Mujal to make them, which he did that year. Although they are based on the nineteenth-century giants, the new ones show the odd new feature, such as the queen's fan, made by hand with peacock and ostrich feathers, and precious stones, to give it the shape of the church shield.

The Gegants de Santa Maria del Mar are members of the Seguici Popular de Barcelona, the city's Popular Retinue of giants and other figures. They take part in lots of iconic city events and open the exhibition of giant dances that starts the La Mercè festival. A year after the giant group had brought the two figures back, they decided to create a special event for them, the historical giants' dance in the church. This consists of an evening stroll round the church and a display of dancing by the city's historical giants before the altar. This begins with the couples entering the church via the central passage.

Salomó and Saba don't take part in many public festivals because of the protocol governing their appearances. But each year they do take part in the Santa Eulàlia and La Mercè festivals, the Corpus Christ procession and some local festivals in Barcelona's old town centre.

The Gegants de Santa Maria del Mar can be visited at the Casa dels Entremesos, where they are displayed with a large part of Ciutat Vella's festival imagery when they are not out on the streets.