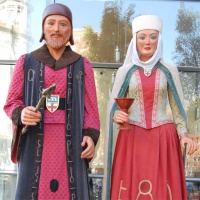 Built in 1997 by
Manel Casserras i Boix

Built in 1997 by
Manel Casserras i Boix

Clotus and Melis, the El Clot Giants, are a couple of medieval magicians. They are dressed in red robes and each holds a symbol of magic. Their names hark back to El Clot de la Mel (Clotus Melis), one of the oldest parts of the Sant Martí district which already existed in the Middle Ages.

The two giants were made in 1996 to replace the older, smaller El Clot giants, cloth figures dating from 1979 and carried as backpack giants by the neighbourhood giant-carriers group. The festival-figure maker Manel Casserras i Boix was commissioned for the job and they were unveiled in November 1996 at the El Clot–Camp de l’Arpa festival, an event they have never missed since.

Clotus and Melis have their own dance, with music by Xavier Muixenc and choreography by Jordi Vallverdú. You can see them year after year with the Sant Josep de Calassanç, Pineta and La Verneda giants when they host their gathering, which coincides with the Sant Martí neighbourhood festival.

In the year 2000 a new member joined the clan, namely Martí, a naughty apprentice magician and the son of Clotus and Melis. Created by Manel Casserras i Solé, this smaller giant was made to be carried by the youngest members of the group and he often takes part in parades and dances with his parents.

The Colla de Gegants del Clot, a group which belongs to the Orfeó Martinenc culture section, has the job of carrying the three figures and making them dance at the city parades and giants' gatherings. They also take a "big head" called Charlie Rivel with them and they are accompanied by a group of shawm players, who add the music and give the festivities some rhythm as they announce the arrival of the giants.