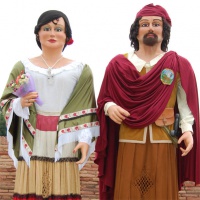 Built in 1985 by
Xavier Jansana

Built in 1985 by
Xavier Jansana

Baró and Trini, the Nou Barris Giants, are a couple of figures inspired by the neighbourhoods they represent: he is a Catalan nobleman, Baron Pinós, the owner of a rural house known locally as Torre del Baró – the Baron's House – and she is a migrant, like many Nou Barris inhabitants, with a name that links her to the Trinitat area. So, the two giants merge the native Catalan culture with that brought by people from the south of Spain in the 1960s.

The idea for the two figures came from the Nou Barris District Council in 1985, when they commissioned Xavier Jansana to create a couple of giants that typified their neighbourhoods. They were able to make their debut at the La Mercè festival that year and began to appear regularly at the city's celebrations.

But Baró and Trini's initial heyday was short-lived. In 1992 their appearances were cut short because they were very heavy and they almost disappeared. Eventually, though, in May 2000, they were recovered by the Germandat de Trabucaires, Geganters i Grallers de Sant Andreu, who started to take them to the district annual festival, the La Mercè festival and other, occasional giants' gatherings.

In 2008 they were restored again by Manel Casserras i Solé, who gave them the appearance they have today, more like their original look.

The colla that carries them round and makes them dance today is very new. In May 2012 a group of local people committed to popular culture decided to get the Colla Gegantera de Nou Barris, which had folded more than 20 years earlier, off the ground again. Since then Baró and Trini have started to play an active part in the district and other parades, including some outside the city, hosting their own giants' gathering around 20 May, as part of the district's annual festival.