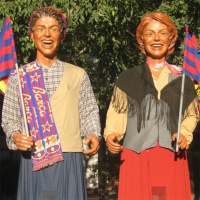 Built in 1992 by
Ramon Aumedes

Built in 1992 by
Ramon Aumedes

Jordi Blau and Mercè Grana, popularly known as the fans, grew out of an idea put forward by the sports daily Mundo Deportivo to create some giants representing Barça (blaugrana) supporters to spice up their celebrations. Their names, a clear reference to the blue and deep red of Barça's shirts, were voted for by the paper's readers.

They were created by the sculptor Ramon Aumedes, at the Sarandaca workshop, and made their first public appearance on 30 April 1998 in Plaça de Sant Jaume, where fans were celebrating Futbol Club Barcelona's triumphs that season. That's why Jordi is holding the league trophy and Mercè the King's Cup.

Following their presentation, they were handed over to the Associació de Gegants del Nou Camp, who took charge of them, and joined a couple of other figures, Joan Gamper and the Avi del Barça - Grandad Barça. At first, they regularly took part in festive events and celebrations organised by Barça fans, as well as the La Mercè festivities and the annual festival in Les Corts, the district where the Nou Camp Association comes from.

Today Jordi Blau and Mercè Grana pretty much only participate in the neighbourhood giants' gathering, held during the Rosary Festival in the first fortnight of October. And they are also occasionally seen at Barça events as well.