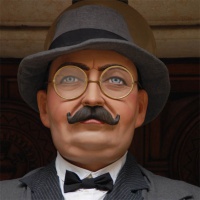 Built in 1990 by
Domènec Umbert

The Avi del Barça – Grandad Barça – and Joan Gamper are two giants associated with Futbol Club Barcelona. The former is a small figure, representing an elderly fan of the club wearing the Barça strip and holding a ball in his hand. The latter is a real giant, representing the club's founder and dressed like a gentleman at the end of the 19th century.

The story of this pair begins with the Avi del Barça, a popular little giant created by the cartoonist Valentí Castanys who first appeared as a cartoon figure in the sports magazine El Xut.

He was the last giant made by the master giant-maker Domènec Umbert, appearing for the first time in public in October 1990. He was christened "Avi" the same month. Two years later, Manel Casserras i Boix made a much lighter fibreglass replica, the one that still goes out today.

Until 1997 he was on his own but that year he was joined by Joan Gamper, on the initiative of Josep Maria Costa and as a tribute to the club's founder. Jordi Grau, at the El Drac Petit workshop, made this giant, whose first appearance in April 1997 was at a huge giants' gathering at the Camp Nou, where nearly 500 traditional and smaller giants from all over the country assembled at "Barça World - Giant World".

Since they were created, the Nou Camp Giants have participated in Barça celebrations and those of the city, as well as those of other places they have been invited to. Today, though, Joan Gamper does not get out much as he is very heavy, and it is the Avi del Barça who represents barcelonisme at festive events and gatherings.