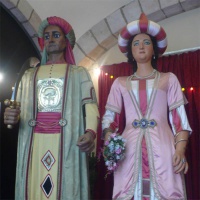 Restored in 1986 by Manel Casserras i Boix

Restored in 1987 by Manel Casserras i Boix

The giant tradition goes back centuries in the parish of Santa Maria del Pi. We know there have been giants associated with this parish since 1601 and the festival organised to celebrate the canonisation of Sant Ramon de Penyafort. We know the gegant was dressed as a Christian soldier.

They are known everywhere for the popular song, created for Corpus Christi in 1798. The song refers to the redevelopment of the Rambla, where the central boulevard was raised and nicknamed "the terrace". The boulevard was flanked by two lower roadways for carriages and other vehicles which locals dubbed "the path". So, in the song, the city giants "dance on the terrace" and the Pi giants "dance on the path". The lyrics also refer to another fact, namely that, in 1798, the Captain General of Catalonia and Duke of Lancaster lifted the bans on giants taking part in processions that Charles lll had imposed in 1780. If you read the words carefully, you can see this: "Ara ballen, ara ballen" (Now they dance, now they dance) indicates they did not dance before.

Everything indicates the figures with the present features were made in 1772 and some documents suggest they are the work of Ramon Amadeu. Even so, this is not certain. There are some who support the idea that the gegant and the geganta are the work of different artists and that they date from the first years of the 19th century.

What we do know for certain is that they were completely restored in 1860. The corresponding invoice in the parish archives is very detailed and leads us to deduce their clothes and jewellery were very valuable. But then they were consigned to oblivion, shut away with the small giants in 1870. We do not know the reason but it is thought that it was because of their excess weight, which made them very heavy and difficult to carry.

However. in 1892 they provided the model for Josep Lluís Pellicer to build some brand new city giants, the Gegants de la Ciutat. The replicas were made in the Llobet i Renart workshops on Carrer de la Palma de Sant Just. The couple represented the biblical King and Queen of Persia, Ahasuerus and Esther. From the photographs that have been kept, we know both giants were a success in terms of their majesty and beauty, even though they were not to the liking of the Barcelona public.

During the Civil War of 1936-39, the Pi parish church was set on fire. However, much of the parish archives and the giants were saved from the flames thanks to the intervention of the Generalitat's Historical Heritage, Artistic and Scientific Archives Section and the good work of Agustí Duran i Sanpere who was coordinating the protection of heritage items at the time and continued to do so until the end of the war. The giants were first moved to the Casa de l’Ardiaca and then to the Pedralbes Monastery, before they were returned to the Pi church when the fighting was over.

They were recovered on 12 June 1960, thanks to the determination of parishioners and Barcelona people. Manel Casserras i Boix, from Solsona, carried out the restoration, directed by Evarist Mora. The giants represent a Moorish nobleman and a Christian woman. In 1985 they were named Mustafà and Elisenda. To save the valuable originals, it was decided to make copies that would also be lighter and easier to carry. The were made separately: the gegant Mustafà in 1986 and the geganta Elisenda in 1987.

The couple form part of Barcelona's popular retinue of giants and festival figures and are always present at the most important festival moments. They appear in the Corpus Christi procession and at the Santa Eulàlia festival. At La Mercè too, for the opening toc d'inici, the seguici d’autoritats and the cavalcade. They also host the Sant Josep Oriol festival.

Since 2010, the originals , or old giants, have taken part in the pregó, the opening speech of the Sant Josep Oriol festival in the Pi neighbourhood, and that is the only time of the year you can see them dance.

When they are not out on the streets, you can still admire both couples: the replicas are on display at the Casa dels Entremesos and the originals are in a glass case inside the Pi church.