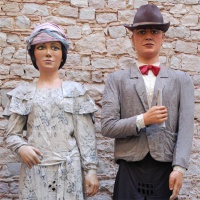 Marcel and Clara, the Montjuïc Poble Espanyol Giants, are a couple of figures representing the first visitors to this mock Spanish village, which was inaugurated in 1929 for the Second International Exhibition. They are a handsome, elegant couple, wearing the typical high-society clothes of that time.

They were built in 1988 at the Can Boter workshop, in Tiana, by order of the Poble Espanyol itself, who wanted their own giants to take part in the festive events they organised. In 2015 Marcel and Clara were restored by Jordi Grau from Drac Petit workshop in Terrassa. Their clothes were also renewed.

Marcel and Clara go out with four smaller giants who represent the seasons of the year: Rosalia, Feliu, Paulina and Andreu. They are also accompanied by the small giant figure of the Catalan actress Mary Santpere, the Queen of Paral·lel. They can be seen all together at events and celebrations held at the Poble Espanyol, as well as at parades and gatherings they are invited to off-site.