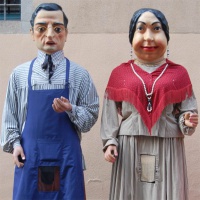 Sr Ramon and Lola, the Raval Giants, represent the working class of that neighbourhood. They are dressed in working clothes and both wear an apron. They are regarded as the first giants produced in the old town, Ciutat Vella, in the new giant era that began with the revival of popular culture following the restoration of democracy.

The Raval Giants were the initiative of the Carrer d’en Guifré street festival committee, who felt the neighbourhood festival lacked a representative figure. So in 1985 they bought a "big head" from the Barcelona shop El Ingenio. Street residents made the body, the trestle and the clothes for the new female giant, who they called Lola because she looked like one of their neighbours, a butcher at the Ninot Market. Lola first appeared in August the same year.

In 1986 the group followed the same steps to make a partner for Lola, Sr Ramon, who is reminiscent of a very popular shopkeeper on the street. He was introduced to the world in September 1986 and a few days later the couple went out for the first time to the city festival, La Mercè. Since then they have never missed any festival, not even Santa Eulàlia.

The Raval Giants soon became associated with the Sant Just neighbourhood and every June since then they have been the mainstays of the local festival. In fact, at the 2000 festival, Lola and Ramon got married.

Around that time there was also an addition to the family. The couple adopted a little girl, an orphan from the Santa Joaquima Vedruna charity: Quimeta Àngels. She is a smaller giant, dressed like a schoolgirl and built by Toni Mujal. These days it is very common to see them all together, often accompanied by a dwarf, Manolito, the most recent addition to the neighbourhood's festival figures.

The Associació d’Amics dels Gegants Ramon i Lola is currently in charge of maintaining the giants. And, since 2004, the couple you can see walking around the city streets are actually a replica.