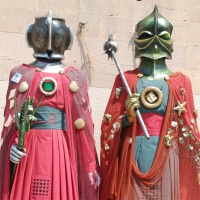 Badalot and Forjat are two giants created to defend King Gaudí and Queen Pedrera, the figures that lead the Casa Milà festival parade group. That's why they look like two warriors ready to fight. Badalot is armed with a long, pointed club and Forjat has a winged dragon in the form of a sceptre, ready to attack. They have a Gaudiesque appearance and their robes are adorned with symbols of the sea and the mountains, such as fishing nets, bunches of grapes and scallop shells.

The story of these giants begins in 1998. Having restored the Casa Milà, built by Antoni Gaudí and popularly known as the "Pedrera" (quarry), the Catalunya Caixa Foundation decided to build a series of figures to represent the house at festivals and other cultural events.

The task of building the parade group, or comparsa, consisting of the warriors, the king and queen and two "big heads", was given to the master giant-maker Toni Mujal. He completed them in 1998 so they were able to make their first public appearance at the event held to celebrate the thorough restoration of the Pedrera. From that moment they started to take part in neighbourhood gatherings and parades, as well as the La Mercè and Santa Eulàlia festivals.

In 2011, after they had been locked away for over six years, the giants saw the light of day again. They were restored by Toni Mujal, who repainted them, changed their clothes and made them more portable. The Catalunya Caixa Foundation then handed them over to the Coordinadora de Geganters de Barcelona, who are still responsible for taking them out and making them dance at public festivals, as well as looking after and maintaining them. When they are not out and about, they are on display at the Eixample district offices.

The Pedrera Giants have their own dance, with music by Joan Amargós and a choreography created by Abel Plana, Maurici Arias, Josep Maria Blanes, Miquel Burgès and Nicolás Alonso, all members of the Coordinadora de Geganters de Barcelona.