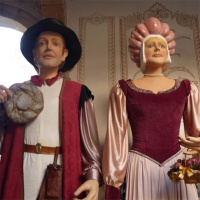 Martí and Dolça, better known as the La Verneda Giants, are a couple of millers who recall the large number of mills there used to be in the old town of Sant Martí de Provençals.

In November 1995, La Verneda residents unveiled a couple of giants that would represent the neighbourhood in public festivals and gatherings. They were built by Jordi Márquez and christened Martí and Dolça after a public vote.

Not long after, though, in 1998, the sculptor Xavier Jansana made new, lighter versions with different proportions. Since then two pairs of giants have been kept.

Martí and Dolça hold their giants' gathering at the La Verneda annual festival, around the Feast of St Martin, on the second weekend of November. They can also be seen during the La Mercè festival and at the annual festival parades and other events in the nearby neighbourhoods, where they are always carried by the Colla Gegantera de la Verneda – Sant Martí.