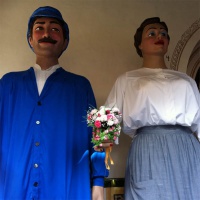 Xava and Xinxa, also known as the new Sants Giants, represent two workers at Espanya Industrial, an old textile mill built in the neighbourhood in the middle of the 19th century, on a site that is now a park with the same name.

The names chosen for these giants also reflect their origins. Xava is a reference to the large number of migrants from the south of Spain who came to work in the Sants factories, and who spoke Catalan with their southern accent. Xinxa, on the other hand, recalls the women workers who left the factories very dirty, smelling of the machines they worked on.

The story of the new giants begins in 1986, a year after the old ones were recovered, when the local giant-carriers and neighbourhood associations decided they needed some more contemporary figures that were representative of Sants, alongside the traditional couple.

Xava and Xinxa are the work of the Gremi d’Artistes de Sants, who made them that year, enabling them to be presented in Parc de l’Espanya Industrial. However, the following year they had to be remade from head to toe, a job that was given to the master giant-maker Domènec Umbert.

The new Sants Giants play a very important role in the neighbourhood's festival calendar. They take part in the reading of the opening speech at the annual festival, in August, and they are the hosts of a big giants' gathering in April, with other giants from the area. And when they are not out and about they are permanently displayed at the Cotxeres de Sants civic centre.