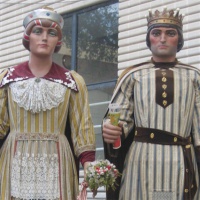 Bartomeu and Maria, better known as the old Sants Giants, are classical figures representing a medieval king and queen. They are based on a standard model, so they are like many other giants around.

Their story begins in 1945, when the Santa Maria de Sants parish decided to get some giants that represented the neighbourhood and which they could take on the Corpus Christi procession, as well as to the annual festival. They bought them from the El Ingenio workshop and the pair began to appear regularly on the appointed day, until the procession stopped and they were shut away in the parish.

There they remained for many years until they were recovered, on the initiative of the coordinating committee, the Coordinadora de Geganters de Barcelona, in 1985. The same year saw the setting up of the Geganters de Sants, who are still responsible for them today, and later they were restored by the Barcelona giant-maker, Domènec Umbert.

During this new period, the old giants were very active, thanks to the new group who carried them round and called them Bartomeu and Maria, in honour of the patron saints of the old town of Sants.

Even today they have an important function on the Sants festival calendar. They take part in the reading of the opening speech at the annual festival, in honour of St Bartholomew, along with the new giants, and they are the hosts of a big giants' gathering in April, with other figures from the group. And when they are not out and about they are permanently displayed at the Cotxeres de Sants civic centre.