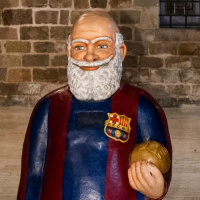 Built in 1992 by Domènec Umbert

The Avi del Barça mini giant is inspired by the charming character created by the artist Valentí Castanys and which first appeared in 1924 in the magazine El Xut.

The figure was the first piece to belong to the Nou Camp giants and the final work of the imagery maestro Domènec Umbert. The figure had its first outing on 13 October 1990, beneath the pine tree at the old football ground in Les Corts. In 1992 Manel Casserras i Boix made a much lighter fibreglass replica, which is the one still used today.

Since they were created, the Nou Camp giants have taken part in Barça celebrations and city celebrations, as well as festive events in other places they have been invited to. These days it’s the Avi del Barça figure which usually represents the club and its supporters at festive events in different places as his partner, the Joan Gamper giant, is very heavy.