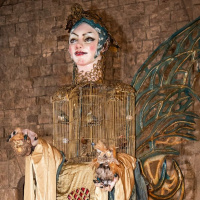 Constructed by Dolors Sans in 2013

The ‘Ocellaire’ is an asexual figure, an allegory of human freedom. The work of art, inspired on a character from the film ‘Bridge to Terabithia’, wears a Modernist bird-shaped hat on its head and a golden cage on its body with the door open, a symbol of inner freedom. The figure, which also has wings, holds an owl in one end, symbolising wisdom, and a nest in the other hand, which symbolises hope.

The small giant was built by Dolors Sans as a lightweight piece for people who have just started out carrying giants, and it was presented for the first time in 2013 at the Modernista Fair of the Annual Festival of the Dreta de l’Eixample. In 2017, resulting from the collaboration of the Colla Arreplegagegants team, or the ‘Ocellaire’ giant-carriers, with bodies and organisations that work with disabled persons, the figure was adapted for wheelchairs so that it could be carried by people with reduced mobility. It is currently the host figure of giants events in neighbourhoods of the Eixample that don’t have their own giants and of the Transeixample.