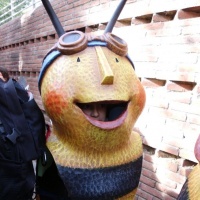 Created in 2013 by the Sarandaca workshop

Les Abelles del Clot is a costumed group made up of four very congenial individuals: two act as “capgrossos” [big-head figures] and two as “cavallets” [little horse figures]. They belong to the Gegants del Clot and the cultural section of the Orfeó Martinenc, an organisation that covers many of El Clot's popular-culture groups. They debuted in 2013, during the neighbourhood's “festa major” or big annual festival, which is held in November.

Les Abelles del Clot were created in the Sarandaca workshop, from a design by Gina Portillo Andrés, in collaboration with the group’s children. So, even though the “capgrossos” can be carried by adults, the group has a clearly child-like nature. In fact, the group explains that it was a project they had started in 2011, to get the very young involved in their music processions.

They have their own dance, accompanied by Noè Rivas’ music and choreographed by Josep Antoni Espinosa and Joana Gras. The pieces are normally accompanied by a children’s group dressed in yellow which is important in getting them to dance. If you’d like to see them in action, you’ll find them in the music procession in El Clot's big annual and spring-time festivals.

The group was created with an associated legend. It says that many years ago, when El Clot was still known as El Clot de la Mel, bees shared land with Clotus and Melis, a pair of giant magicians. One fateful day a wicked magician cast a spell on the giants, who fell asleep and failed to wake up until 1996, thanks to the giants’ groups. It was only later, in 2013, that Les Abelles were woken up.