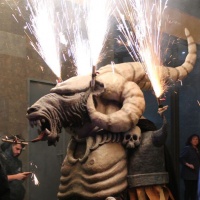 Aegis is a billy-goat-shaped “capgròs” or big-head figure that belongs to the Els Bocs de Can Rosés devils group in Les Corts. The group had wanted to create it to celebrate its own twentieth anniversary and it was presented to society in October 2016, at a fire-run during Les Corts’ big annual festival. This is because one of Aegis’ distinctive features is that fire can be launched from it through eight different points.

It was created by the artist Daniel Raya, as part of the Els Bocs de Can Rosés project. And, as with most fire beasts, it has a terrifying appearance: it is a goat with very twisted horns, it has earrings all over its face and sticks out its tongue as a sign of provocation. The group organised a crowd-funding campaign to fund its construction.

The inspiration behind Aegis comes from a mythological figure: according to the myth, it was a monster with the hair of a goat that hurled thick flames through its mouth. The beast was hunted and killed by the Goddess Athena, who used its skin to make herself a protective shield with. If you’d like to see it in action, and it’s always in the company of its devils’ group, you've plenty of occasions for that: at Les Corts’ “festa major”, at the eve festival for Sant Joan (Midsummer's Night), and at the fire-runs.