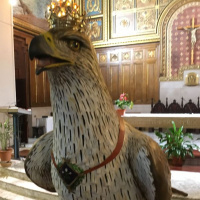 Made in 2018 by Jordi Grau at the El Drac Petit workshop.

During the 2018 Gràcia festa major [big annual festival], a new beast was shown off for the first time. This figure is very important for the old town; the Gràcia Eagle. This highly symbolic figure was built in the El Drac Petit workshop in Terrassa. It has a crown on its head and bears the Vila de Gràcia crest on its breast. Those escorting the figure wear traditional clothing, with rope-soled shoes and linen garments in brown, white and ochre.

The figure also has its own dance, divided into three parts. First there is a presentation, followed by the main piece and concluding in a more upbeat manner. The melody was composed by Fernando Landín and the lyrics were written by Francesc Landín The aim is for young children to sing the song, and make it their own.

In addition to its debut at the local festival, the Gràcia Eagle will be involved in all official festival acts, except for the fire run. It will also perform its dance of honour for the Vila de Gràcia awards ceremony, as well as to specific audiences. In certain cases, the figure may also represent Gràcia in ceremonies held outside the former town.