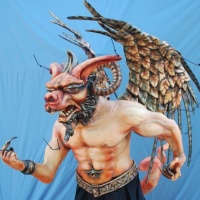 At the Gràcia annual festival in 2016, a new fire beast was unveiled to this historic locality: Atzeries. Belonging to the Vella de Gràcia devils, this devil has animal attributes. That’s what makes it so frightening: it has a billy goat’s head (with spiralling horns), a man’s body, wings, a tail, and to accentuate its provocative attitude, it gives the finger. The artist from Vilafrancs Dolors Sans was in charge of making this piece, which is carried just like the festival giants. It has eleven fire shoots on its finger, hand, head, wings and tail.

Three years before the birth of Atzeries, Vella de Gràcia sought inspiration from various neighbourhood legends to create their own fire beast. In the end, they opted for Casa del Dimoni (the Demon’s House), a building on c/ Josep Torres. According to this legend, in the 19th century a businessman Agustí Atzeries lived there and went bankrupt while doing renovations. To be able to finish the work, Atzeries sold his soul to the devil. He won the lottery shortly after. To show his gratitude, he named his house after the devil.

The beast is brought out for formal occasions and fire events. This means it can be seen in festival parades or at fire-runs, bathed in gunpowder. It has several dances: ‘L’Atzeries’, created by Guillem Roma; ‘L’Infern’ by Daniel Tort, and ‘Los Garrochos’ by Rosa Dies. If you want to see it in action, you can always catch it throughout the year at the Gràcia annual festival, the festival group day, the Mercè festivities and the Sant Antoni de la Pobla bonfires in Gràcia.