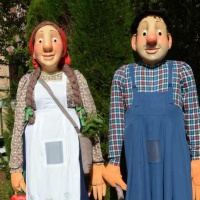 Built in 2016 by Germà Maurici

Built in 2016 by Germà Maurici

The figures are a couple of ‘manotes’ (giants whose arms are not rigid) built by Germà Maurici and they are dressed in clothes and accessories made by the Ambar Prim Women’s Association. The giant represents an iron worker to remember the neighbourhood’s industrialisation process, which is why he is carrying a hammer in his hand. The giantess is a peasant who represents the neighbourhood’s agricultural past, which is why she is carrying a tomato in her hand and is wearing an apron embroidered with flowers.

During the year, the two figures are on display in the Besòs i Maresme Civic centre.