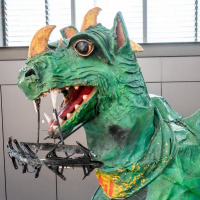 Built in 1985 by Josep Alcober

Pitu de Sants is the first dragon built by the gang of Diables de Sants. It was created in 1985 by Josep Alcober, 'Pitu', who gave him the name. In 1991, the figure - at least the head - was totally destroyed at the correfoc de la Mercè. The dragon was once again built and premiered in 1992 at the opening ceremony of the Paralympic Games in Barcelona. The year 2017 was restored again.

In Pitu it is a large dragon with up to thirteen firework firing points. The musicians of the Diables de Sants accompany their performances. The image of Pitu the Dragon riding a boy or a girl from the group of devils has become emblematic in the correfocs of Barcelona.