Around Christmas, from St Nicholas's Day to Candlemas

The Christmas cycle is a period that runs from the Feast of St Nicholas (6 December) to Candlemas (2 February), which is when the nativity scenes are taken apart. It includes a large number of celebrations and religious rituals that revolve round the birth of Christ but also maintain a lot of pagan traditions, such as fer cagar el tió (make the log "shit")

Christmas is above all a festive time, when families and friends get together, but there are some customs that vary little from one household to another: the log, the nativity scene, Christmas carols, Christmas poems, big meals and so on.

There are a lot of cultural and festive events outdoors around this time too, such as the Christmas fairs and markets, musical street processions, cavalcades, nativity plays and live nativities. The streets are illuminated with Christmas lights and a number of curious figures can be seen walking around with their retinues, such as the Carassa, the Esperit de Nadal and the Home dels Nassos.

The festivities and feast days celebrated around Christmas commemorate the birth of Jesus, the bringer of light. The Catholic Church combined this event with the winter solstice, a time when days start to become longer and nights shorter, when light triumphs over darkness and awakens the earth, which will then begin to prepare itself to bear fruit. That is the reason for the constant references to light, presents and gifts during the Christmas cycle.

The Christmas celebrations are the heirs of Roman and Iberian festivals in honour of three sun gods: Mithra, Sol and Elagabalus. These celebrations are known as Natalis Solis. The Christian tradition is linked to them because it commemorates the birth of he who is believed to have brought light to the world. 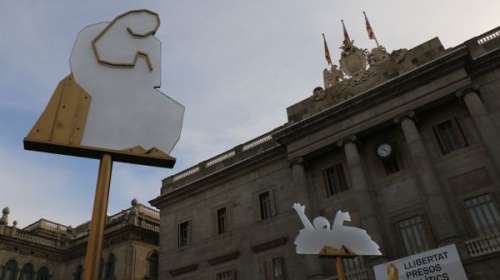 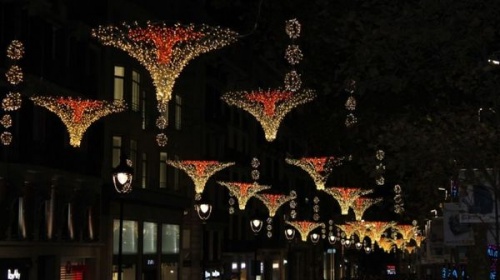 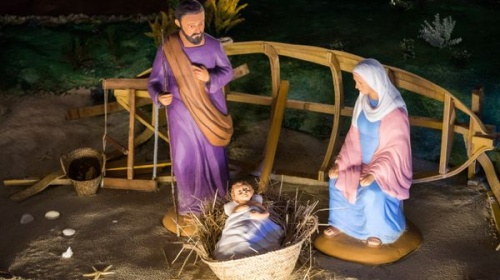 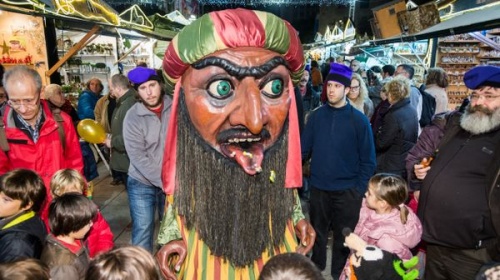 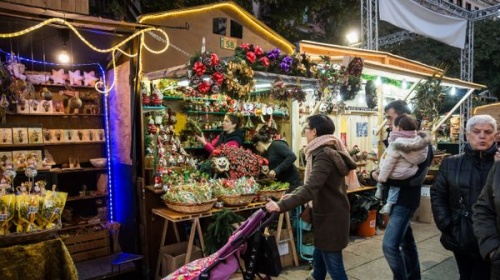 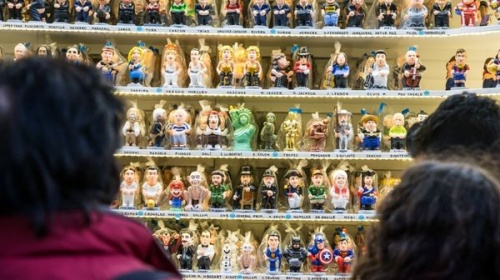 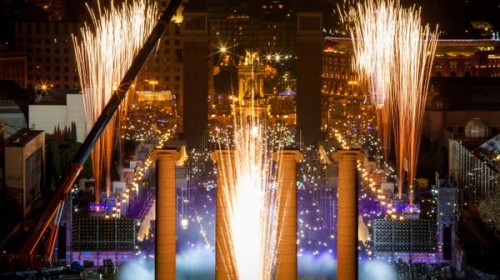 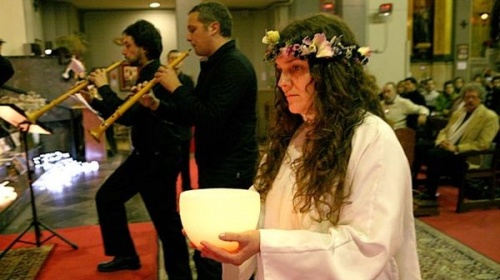 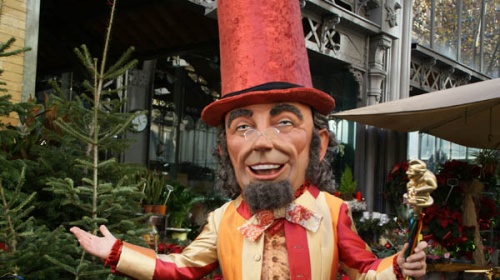 Switching on the street lights and unveiling the nativity scene in Plaça de Sant Jaume. The Christmas lights in the city's streets and squares, as well as on some official buildings, are switched on during the last weekend in November. The same day sees the inauguration of the municipal pessebre (nativity scene) in Plaça de Sant Jaume, when the choirs of the Federació Catalana d’Entitats Corals sing carols, another sign that the Christmas festivities are starting.

Christmas fairs and markets. At this time there are a number of fairs and markets in Barcelona based on Christmas traditions. For example, you have the Fires de Santa Llúcia, which sell all kinds of figures and accessories for nativity scenes. These are held from the last weekend in November to 23 December, notably those in Plaça de la Catedral and Plaça Nova, though there are more in some of the neighbourhoods. Then there is the Fira de Sant Tomàs, or Fira dels Reis (Three Kings Fair) with craft toys and gifts as its star products. This is held on a stretch of the Gran Via de les Corts Catalanes between 21 December and 5 January.

Pastorets. One of the traditional features of a Catalan Christmas are the performances of the pastorets, a kind of popular theatre that portrays the birth of the Messiah but gives prominence to the shepherds. This nativity play is usually staged by amateur actors of all ages in civic centres, cultural centres, parish halls and theatres. The pastorets tradition has two branches: the drama of Frederic Soler "Pitarra" –El bressol de Jesús o en Garrofa i en Pallanga (Jesus's Crib or Garrofa and Pallanga)– and that of Josep Maria Folch i Torres –Els pastorets o l’adveniment de l’infant Jesús (The Shepherds and the Advent of Jesus) – which has a more serious tone. Most of the pastorets performed in Barcelona these days are based on the Folch i Torres model.

El tió. This is a tradition that has been kept over the years and is the most eagerly awaited one on Christmas Eve. Fer cagar el tió (make the log "shit") is a domestic ceremony for the little children of the household, which consists of singing a song while beating the log with a stick so it empties its bowels and produces presents for all the family, traditionally sweets and other sweet things.

Els Sants Innocents. This is the name Catalans give to their equivalent of April Fools' Day, 28 December, when people play tricks and practical jokes on family and friends. Jokes with no malice intended that are only accepted on a day like this. One tradition involves sticking a llufa (a paper doll) on the back of some unsuspecting "innocent".

Sant Silvestre. On the last day of the year, St Sylvester's Day, Barcelona revives the tradition of the Nose Man – Home dels Nassos – which is also rooted in many other towns and cities round the country. Early in the morning the capgròs (big-headed figure) in question, who only appears on this day, sets off with his retinue on a cercavila, a musical parade round the city centre. This event, really aimed at young children, ends in Plaça de Sant Jaume with the handing over of the keys for the New Year to the municipal authorities.

New Year's Eve. Along with Sant Joan, or Midsummer's Eve, this is one of the most popular dates on the Catalan festival calendar. In Barcelona it has traditionally been a celebration without any set purpose. Each house has its own party and supper with friends and family. But 2013 saw the start of a public celebration involving a huge firework display with a theatrical performance, and displays of popular culture on the ground by castellers, human tower groups. It brought back the "Ésser del Mil·lenni" (Millennium Being), a giant, 15-metre tall sculpture that first appeared some years ago to bring in the millennium and has since been on display at the Parc del Mil·lenni in Gavà.

The Three Kings procession. On the evening of 5 January, Barcelona organises a big welcome for the Kings of the Orient, who set off on a big parade through the city's streets, followed by a long procession of royal pages, floats and groups of artists, dancers, postmen and others formed by members of any Barcelona associations and organisation that wish to take part. Since the 1960s, it has been the custom for the Three Kings to arrive by ship and be met at the quayside by the mayor, who is sometimes accompanied by the city's official festival representatives: the City Eagle and Giants, and the Municipal Band.

Christmas in Barcelona provides the setting for lots of rituals and celebrations, as well as some festival figures that appear at this time of year. Here is a brief description of some of the most typical ones: the Carassa de Nadal, the Esperit de Nadal and the Home dels Nassos.

The Carassa de Nadal (Christmas Big Face) is a festival figure associated with the Christmas celebrations in the city. He represents a Saracen, has a long, thick beard and a gaping mouth for "spitting out" sweets. He moves around on wheels and is unusual because he can blink his eyes. Created by Manel Casserras i Boix, he can only be seen at the Fira de Santa Llúcia on the weekends before Christmas.

Esperit de Nadal (Christmas Spirit) is the capgròs, or big-headed figure, in charge of inaugurating the pessebres (nativity scenes) in the centre of Barcelona and officially opening the city's Christmas festivities. So you can only see Esperit, created by Jordi Grau, at Christmas, taking part in events such as the Christmas lights switch-on and the Three Kings parade.

The Home dels Nassos (Nose Man) is another capgròs, representing an old man with a very big nose who is dressed in clothes that suggest the passing of time, with elements that remind us of the four seasons. He was made by Amadeu Ferrer and only comes out for one day: the last day of the year, St Sylvester's Day.