The festival of Mercè, the patron saint of Barcelona, is celebrated each year around the 24th of September in squares and streets across the city.

It is a short but intense festival, chock-full of diverse cultural activities for all ages. Among the many events, highlights include the morning of the festa major, the main day of celebration, the Mercè cavalcade, the huge correfoc fire run,  the procession of Gegants i Nans (giants and dwarfs), the human towers, and the dances from around Catalonia. Also important are the many and varied cercavila parades. This is one of the oldest traditions in the city, descended from the Corpus Christi processions which were already taking place as early as the 15th and 16th centuries.

The festival pays homage to the Patron saint of Barcelona who is attributed several miracles linked to the city. Legend has it that on 24th September, 1218, Our Lady of Mercy simultaneously appeared to King Jaume I, St Pere Nolasc and St Ramon de Penyafort and charged them with setting up a religious order to rescue the Christians who were being held hostage Saracen lands. Some centuries later, in 1687, Barcelona was attacked by a terrible plague of locusts and the city invoked the protection of Our Lady of Mercy. When the insects left, the people proclaimed her the patron of the diocese, although this was not made official until 1868, under Pope Pius IX.

In 1868 Barcelona began celebrating religious and folk festivals in honour of Mare de Déu de la Mercè, around 24th September. Even so, during this last third of the 19th century, the celebration suffered some serious highs and lows. It was in 1902, under a strongly Catalan and conservative municipal government, that for the first time a big festa major aimed to demonstrate the diversity of folk traditions in the country through a variety of cultural activities, many of which had disappeared from the city: balls de bastons (stick dances), balls de diables (devil dances), giants and beast spectacles, castells (human towers), and sardana dances.

Constant clashes between those who were in favour of a conservative religious festival and supporters of a secular folk event with parades, decorated streets, dancing and fireworks, meant that the celebration weakened between the 1920s and 30s. And after the 1936-1939 war, it gained an air of national catholic passion and strict Francoism. In the sixties the festivities began to include some folk elements.

The festes de la Mercè as we know them today came about along with democracy, when Barcelona City Council decided to completely transform the big annual festival into a celebration where popular culture and the general public took to the streets to have fun. They gave the task of designing the festival to a small group of cultural activists, who used the surviving traditional celebrations of surrounding towns, like Garraf and Penedès, as their model. The Barcelona locals eagerly accepted this festival format, which has become further consolidated over the past thirty years.

Alongside this effort to regain the festival, groups of geganters, bestiari, bastoners, castellers, and diables, with their giants, beasts, stick dances, human towers and devils, have emerged in the city, as well as traditional music ensembles. Little by little, they have been the recovering dances, rituals and figures that are an essential part of the festival today. 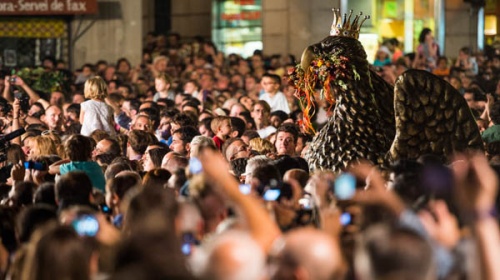 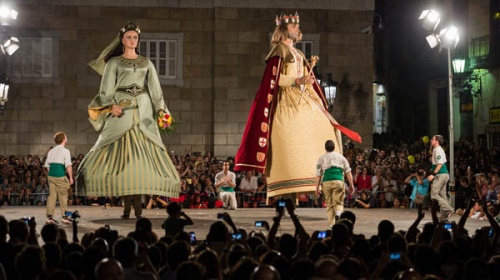 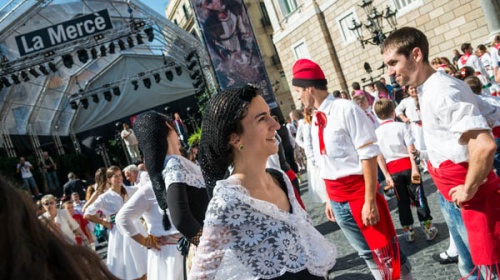 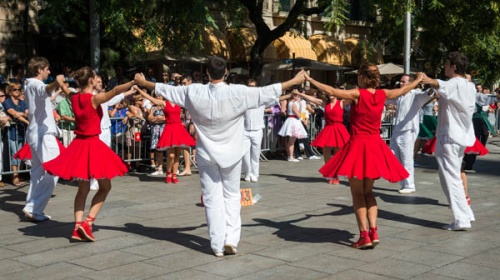 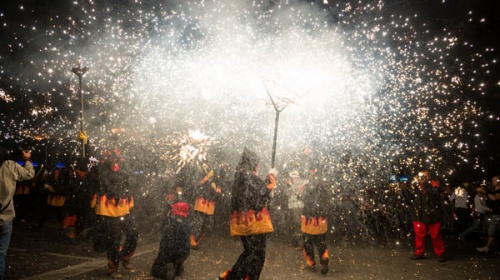 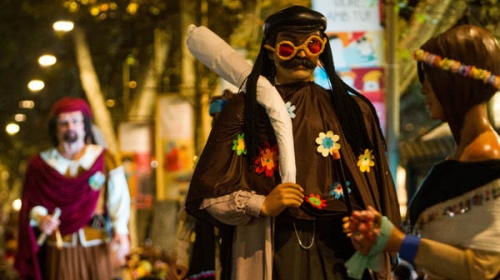 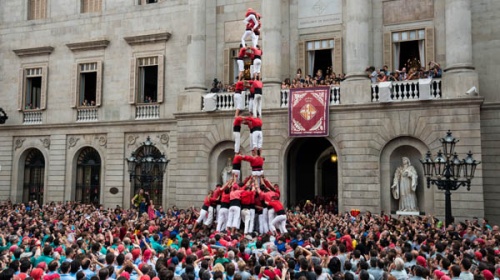 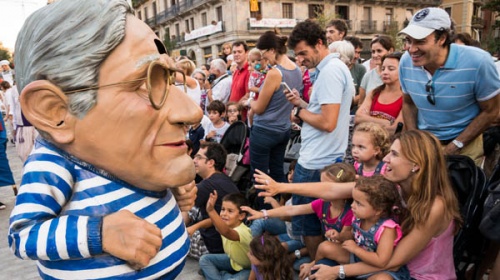 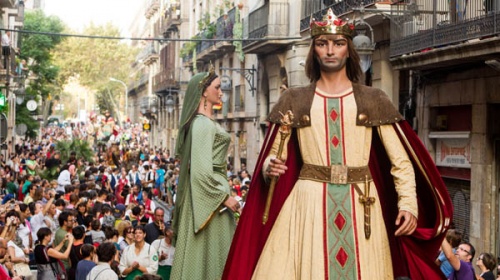 The Seguici Popular de Barcelona is the embodiment of a research project on Barcelona's unusual, historic and unique references which have a symbolic function within the festival. It was set up in 1993 and contains the city's festival imagery – the Àliga de la Ciutat i els Gegants de la Ciutat, the eagle and giants–, historical figures like the Gegants del Pi and others recreated from historical documents: the Gegants de Santa Maria del Mar, the Bestiari Històric de Barcelona –the Lion, the She-mule, the Ox, the Wyvern, the Dragon of Ciutat Vella, the Cottoner Knights (Cavallets Cotoners) and the Fierce worm (the Tarasca or Cuca Fera)– and the Macers big-heads. The Seguici, which has a protocol regulating the outings and performances, is very important in the festes de la Mercè because it is part of the seguici inaugural, the Toc d’Inici and the seguici d’autoritats.

Opening parade. The festes de la Mercè begin with two simultaneous events: the proclamation, read at the City Council's Saló de Cent, and a solemn communal parade around Barcelona, known as the seguici inaugural, which takes place in the streets of Ciutat Vella on the first day of the festival at 7 pm. Along the route, the musicians of the Ministrers del Camí Ral play Toc d’inici, a piece inspired by the popular song Cançó de Barcelona.

The Toc d’Inici. The Toc d’Inici takes place in Plaça Sant Jaume after the reading of the proclamation and the seguici inaugural. It begins with the melody of the same name, and all the festival’s elements that make up the Seguici Popular de Barcelona form up in a semi-circle around the square. Once it is completed, each of the festival images climbs onto the stage in their regalia perform their dance, every one of which has its own music and choreography. To bring the event to a close the Ministrers del Camí Ral play the final piece of music: the Toc final.

Xambanga. On the eve of the Mercè the city's colles geganteres, the festival giant groups, take the giants from where they are on show to the courtyard inside the City Hall, from here they will set off on the cercavila parade the next day. To make this little outing even more enjoyable, the giant dress up and compete with each other to see who is the most original.

Les matinades dels grallers. This is the parade of gralla pipers from the city's groups of devils and giants that is held on the morning of the 24th at 8 am. They go round the streets of the old quarter playing the Toc de matinades, which invites the people to get up early so they can enjoy all the festival events.

The dances and processions of giants and dwarfs. This geganter, or giant, event is held on the morning of the feast day and has two parts: firstly, the gegants barcelonins, the Barcelona giants, who have spent the night in the City Hall, come out into the square and arrange themselves for the beginning of the Matí Gegant, giant morning. Then, in the same square, they perform the Mostra de Balls de Gegants, where each pair gegants or gegantons (little giants) presents their specific dances, using their own music and choreography, if they so wish. The second part is the midday procession of gegants and nans (dwarfs), through the streets of the old quarter which takes them to a place close to where the Mercè festival cavalcade will set off from later in the afternoon.

Seguici d’autoritats. The central day of the festival, after the festa major Mass has been said at the Basilica of Mare de Déu de la Mercè (Our Lady of Mercy), some colles castelleres build honorary human pillars. After this is the seguici d’autoritats, the procession of the authorities, in which a group made up of the Municipal Band of Barcelona, the Seguici Popular de Barcelona and the members of the human tower groups, the colles castelleres, accompany the officials to Plaça Sant Jaume.

Les diades castelleres. As part of the La Mercè celebrations, local and invited colles castelleres, human tower groups, star in two events. The first, known as the diada castellera de la Mercè (and also as the diada de colles locals), is held on the 24th in Plaça Sant Jaume and involves all the Barcelona groups. The other, held on the Sunday closest the festival is the diada castellera de colles convidades, and involves two of the best groups from outside the city and the colla Castellers de Barcelona, who host the event.

La cavalcada de la Mercè. This is a travelling spectacle which is the central act in les festes de la Mercè. Over the years the cavalcade has changed its name and format, but it has been going since the early decades of the 20th century. Since 1986 it has been organised by the Coordinadora de Geganters de Barcelona, and of all the festive imagery, it is the giants that are the stars of the procession. It takes place at 6 pm on the diada de la Mercè, in a big location in the city centre.

El correfoc. One of the most anticipated events of the festes de la Mercè is the correfoc, the fire run, one of the most spectacular pyrotechnic demonstrations in the country. This event has two parts. First is the tabalada, a staging in which Mascle Cabró, the city's billy-goat character, appears and recites satirical verses. Then comes the ceptrotada, which involves the lighting of all the most spectacular of the colles' sceptres, tridents and standards which hold the most fireworks. When this finishes, it makes way for the second part of the show: the lighting of the Porta de l'Infern, Hell's Gate, a structure which is set all aflame. When the fire goes out, the door opens and out pour devils, dragons and fire beasts that embark on a route around the most central streets of Ciutat Vella.

The procession of beasts. The night before the correfoc, the city's most emblematic bèsties make a nocturnal procession without fire, which brings to a close the bestiari de foc, fire beast exhibition in the foyer of City Hall. This is a great idea because all the people are able to calmly enjoy the city's dragons and beasts who are accompanied by their respective percussionists.

Ball de bastons: Matí Bastoner. Barcelona currently has nine colles de bastoners, stick dancing groups, who also take part in the festa major. On Saturday morning, all the stick dancing groups in the city, as well as invited colles, perform stick dances. At midday they process round the streets in the cercavila de bastoners, and finally dance their way to another central location for the festival, where they finish their display with the final dance, the Matí Bastoner.

MercèDansa. This is an exhibition of currently established and documented dances from the Principality, Northern Catalonia and the Franja de Ponent (easternmost part of Aragon). MercèDansa is organised by Esbart Català de Dansaires dance group and is made up of two parts: one is a presentation of all of the dances and the other involves teaching the public how to do them.

La sardana. The sardana is an important part of the festa major in Barcelona. As well as the competition between sardana groups, the Concurs de Colles Sardanistes, and the dance and concert of the traditional music group, the Cobla Ciutat de Barcelona, there are four other dances in different places an at different moments in the festival. Three of these are the usual dances of the city's sardana organisations: the Obra Sardanista Violetes del Bosc, the Unió de Colles Sardanistes and the Agrupació Cultural Folklòrica Barcelona dances.

The Galop de la Mercè is a dance which is only performed in the festes de la Mercè. The tune was composed by Jesús Ventura i Barnet, at the request of the Servei de Festes, so that Barcelona's patron saint would have her own dance. The Galop de la Mercè is played by a traditional music group for sardanes, a cobla, and it is danced on the festival Sunday in Plaça Sant Jaume and at the close of MercèDansa. Everyone can join in this dance, and the organisers hand out mocadors, handkerchiefs, to the participants.