Around the Feast of Sant Roc, in mid-August

The Gòtic neighbourhood is the oldest part of Barcelona, a place where lots of buildings and streets have a special historical significance. It comes as no surprise, then, that the oldest festival still preserved in the city is held there, namely the Festes de Sant Roc, which are mainly held in Plaça Nova. These have been held without a break since 1589.

The Associació de Festes de la Plaça Nova is in charge of organising all the activities and ensuring they maintain the traditions of the celebration, which is why you can find all kinds of unusual features there. Leaving aside the sardanes, festival dances and the cercavila, you can also taste the traditional Sant Roc panellets, drink wine from a porró llarg , take part in the cucanya competition and the dog festival, or join in the seguici tradicional.

The festival pays tribute to Sant Roc who, according to Barcelona legend, caught the plague on a visit to the city and took shelter in the Roman walls. Everyone ignored him, except the local baker's dog, which fed him on bread rolls. Thanks to that he recovered and was able to continue on his way, accompanied by the little animal. Sant Roc is attributed with protecting the people of the neighbourhood against an outbreak of the plague in 1583, because nobody died as a result of the epidemic. That explains why the festival is a neighbourhood vow that is renewed every year, during the solemn festival mass held in the Pi church.

The origins of the Festes de Sant Roc in Plaça Nova can be traced back to 1589. According to the documents that have come down to us, that was the year when the festivities were first held, as a celebration by the people in honour of the saint who had protected them from the plague. Originally the festival consisted of a procession, which has gradually evolved into the seguici festiu , a retinue of festival figures that we know today. Since 1589 it has only been interrupted by the first years of the Peninsular War and the Spanish Civil War (1936-39). But it resumed immediately because the Franco regime believed it had a very strong religious character. 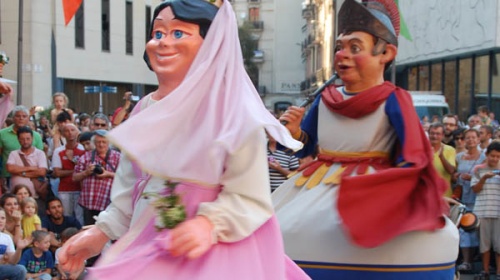 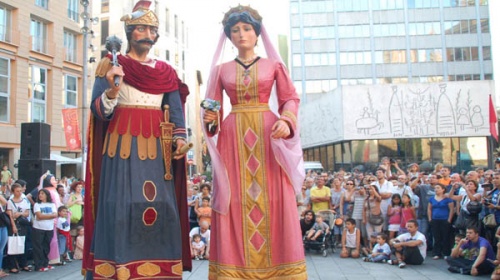 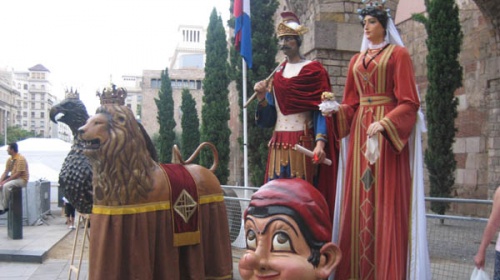 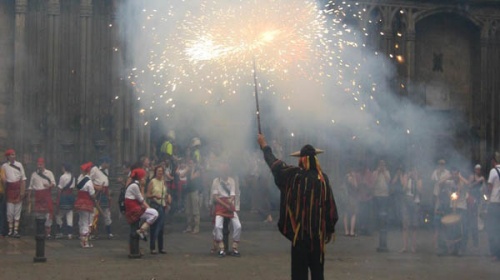 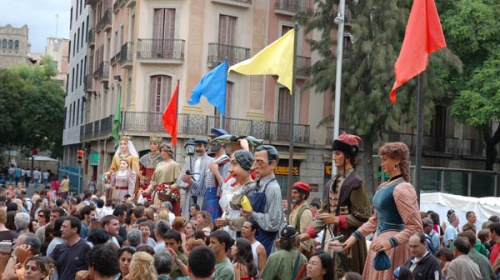 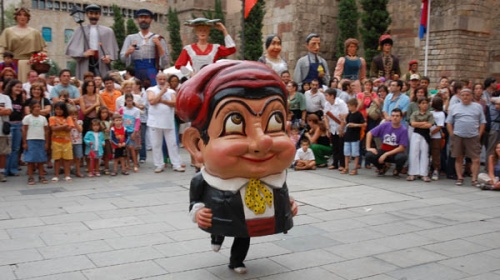 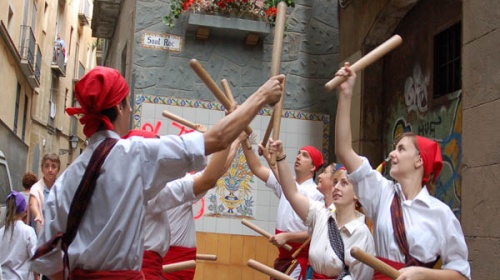 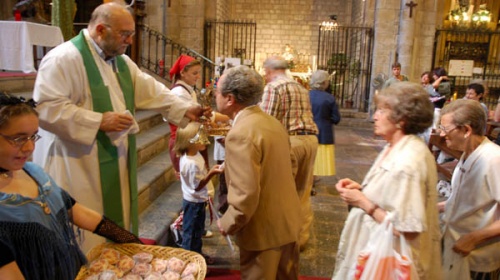 The typical Sant Roc cakes are panellets but they are nothing like those eaten during All Saints. They are halfway between the Christmas polvorón shortbread and a tea cake. They are blessed at the Sant Roc mass and shared out among festival goers all day. According to legend, bread rolls were handed out originally, like those the dog offered the saint.

Seguici de Sant Roc. The saint's feast day, August 16, starts in the morning with a procession of the traditional festival retinue, the seguici. The figures taking part include a devil, the Diable de Sant Roc, an eagle, the Àliga de la Ciutat, a lion, the Lleó de Barcelona, giants, the Gegants de la Plaça Nova,  and a dwarf, the nan Cu-cut. Patron saint banners are also displayed. Together they head for the Pi church to take part in a solemn mass, where goig verses, are sung in honour of the saint and the panellets are blessed.

After mass, the festival committee's green flag is hung from the bishop's palace balcony and flowers are offered to the saint. The gegants Roc and Laia also perform their century-old dance there too.

Trobada i ball de gegants. For over thirty years now, Plaça Nova has been the setting for a big gathering of giants during the festival. This is presided by the hosts, the two Plaça Nova giant couples, and it brings together a large part of Ciutat Vella's festival and popular culture figures, plus others from elsewhere, who perform their respective dances.

La cucanya. The cucanya is a children's game that takes place every festival afternoon. It consists of crossing a greased beam that revolves round an axis to get a prize. This dates back to 1884 and is one of a number of traditional cucanya games that include sack races, trencar l’olla (breaking the pot), etc.

El porró llarg. At midday on Sant Roc's feast day, a porró llarg is placed in the square for a tradition that goes back to 1829. This pitcher, with a 55 cm spout, is filled with wine so the most daring present can try drinking it, held up by someone else.

La festa del gos. Tradition says: "15th Mare de Déu d'Agost, 16th Sant Roc and 17th Sant Gos." So the festival programme includes dog-handling displays and trials, as well as a canine salute to Sant Roc from the neighbourhood dogs. The origins of this can be found in the tribute to the saint's faithful companion: the dog.

Correfoc. The Diables del Barri Gòtic and the Víbria de Barcelona are in charge of the Sant Roc festival correfoc, a fire run that starts in Plaça Nova and continues round the neighbouring streets. When that is over, a firework display brings the festival to a close.

On Sant Roc's feast day it is a tradition to let go a balloon featuring the face of a present-day figure with negative connotations, chosen each year by the organisers. While the balloon is climbing into the air, the kids shout out: "Get lost!"

This custom has its origin in the 19th century, when there was a lot of enthusiasm for hot-air balloons. Initially the balloons were made of papier mâché and raised by gas but these days they are usually made of plastic and can be recovered.