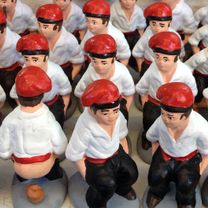 The caganer, literally the "crapper" or the "shitter", is one of the most popular and characteristic figures in the pessebre, the Catalan nativity scene. A pragmatic counterpoint to the mystique of the Christmas mystery.

Although it is a figure that has proved a big hit here, it is not exclusive to Catalonia. You can find caganers in Murcia, Portugal, Naples and so on, where they are known as cagones, cagoes and cacone or pastore che caca (the crapping shepherd) .

Traditionally the caganer is a figure wearing a barretina who is crouching down, smoking a pipe or a cigar and, sometimes, reading a newspaper. Occasionally there is a piglet curiously sniffing around behind him.

For some years now various figure-makers have been making caganers that look like famous people. These include footballers, politicians, the Pope, actors and singers. Each year the new figures are eagerly awaited and usually draw a lot of media attention.

Everything points to this figure being introduced into the nativity scenes at the end of the 17th or beginning of the 18th centuries. But it was not new by any means: it had already appeared on ceramic tiles showing different trades.

Caganers have now become collectors' items. No other figure in the nativity scene has aroused such interest. There is even an association, the Amics del Caganer, that popularises and does research on this amusing figure, organising exhibitions, producing various publications, and so on.

There is still a lot of debate about the meaning of the caganer in the nativity scene. And, as yet, it is a question without an answer.