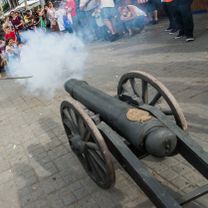 The cannon, pushed by a local resident dressed up as a Napoleonic general, is a very popular piece of artillery in Barceloneta. During a cercavila round the streets, and following his orders, the cannon fires off pyrotechnic salvoes mixed with sweets. After each one, onlookers pretend they have been knocked over by the blast and gather up the sweets.

A lot of stories have been told about where the cannon comes from, some of which are scarcely credible. Some attribute it to the Peninsular War (Frenchman's War in Catalan) and others to a port-defence cannon but there is a real name behind it: Pancraç Farell, a mould maker by trade who worked at the Maquinista factory. Mr Farell married a Catalan woman descended from a French family on her father's side. In 1886 the couple set up the Farell restaurant, soon known as Can Tipa.

One year he was at the festival in the French village where his wife's grandmother lived when he saw a theatrical cannon going round the streets firing bangers and showering the kids with sweets and toys. He loved popular festivals so, in 1912, he had a cannon made like the French one. And since then it has become a local festival symbol.