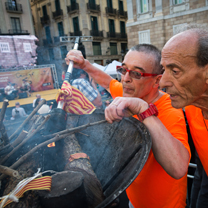 The Flama del Canigó ritual is gradually becoming more popular and more established. It combines with the Sant Joan midsummer celebrations to evoke the common identity of Catalan-speaking lands.

The fire of the Flama del Canigó (Canigou Flame) is never extinguished. It keeps burning throughout the year at the Perpignan Castellet until 22 June, when it is carried to the mountain's summit. At midnight the fire from the flame is shared out among those present. Straightaway they set off, splitting and spreading the fire to light the Sant Joan bonfires in hundreds of towns, villages and cities.

On foot or horseback, by car, bike, boat and any possible means of transport, the Flama del Canigó reaches every corner of the land, thanks to the efforts of numerous groups and associations. Each village, town and city receives the flame in it own way, with music, devils, dance, etc., but always with a shared ritual. Everywhere, when the flame has reached its destination, before the bonfires are lit, a common message is read out to remind everyone of its significance.

This mobilisation requires a big effort to coordinate the routes the flame takes, complete all the paperwork and steps required to get the necessary authorisation and permits, and to publicise the movement so as to highlight and spread it. Obviously, all this work starts many months before Sant Joan, and some years ago now, Òmnium Cultural took on the central role as the body in charge of organising and promoting the activities hundreds of individuals, institutions and associations plan round the flame.

This ritual began in 1955, on the initiative of Francesc Pujades, who lived in Arles de Tec (Arles sur Tech). Inspired by "Canigó", the famous poem by Jacint Verdaguer, he got the idea of lighting fires at the top of the mountain for Sant Joan and spreading the flame around. The custom spread rapidly and in 1966 it crossed the border with France for the first time, reaching Vic. Despite Franco's dictatorship, the tradition gradually spread to all the Catalan-speaking lands, symbolising the survival of the country's culture.