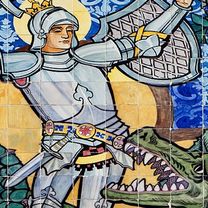 The name Jordi, George in English, comes from the word georgius, which means "land worker, or farmer that works the land". According to martyrology, he was a Roman soldier who embraced the Christian faith and, for this reason, in 303 Emperor Diocletian made him jump through the hoops of his martyrdom. There are versions of the story that say his agonies lasted seven years, and also that he was resuscitated many, many times, until he finally heard a voice calling him to Heaven, just at the moment he was decapitated.

The popular legend that we all know came after all these facts and dates from the 13th century. It was popularised by Jacobus de Voraigne in his Golden Legend, although it was probably collected from an earlier oral tradition.

Whilst Jacobus de Voraigne sets the legend of Saint George and the dragon in Silene (Libya), in Catalonia it has a character, elements and a location all its own. The tale is essentially the same everywhere: a dragon holds a town prisoner and the people are forced to give it cattle to satiate it. When there are no more animals, they feed maidens to the beast. One day, the only daughter of the king draws the short straw. Obviously the king does not want the dragon to devour the girl, so he announces that whoever kills the creature may have the hand of the princess. A handsome knight appears and, according to the Golden Legend, makes the king and all his vassals accept God and be baptised before he kills the dragon. The knight fights the beast and stabs him through the throat with his sword.

In Catalonia, the story has some interesting peculiarities to bear in mind. The first is the setting: our story takes place in Montblanc, not Silene, although in some versions it is set in Rocallaura. The second is that the oral tradition in Catalonia goes on to say that once the dragon is dead, the drops of blood that land on the earth are transformed into a rose bush, which blossoms profusely. The knight picks the most beautiful  bloom for the princess before he disappears.