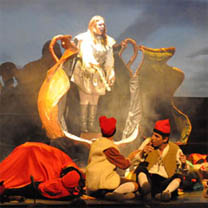 Els Pastorets, the little shepherds, is a very old Christmas performance, originating from the medieval dramas that were part of the Christmas Eve services. These masses, which at first were said in Latin, were known as Officium Pastorum, and it is known that from the 15th century they were already being performed in Catalan. However, from the 16th century they began to decline as a result of the Council of Trent rulings, which prohibited exhibitions inside churches.

In the 19th century they received a boost and new texts were written, in Spanish, until 1887 when Miquel Saurina wrote the first modern version in Catalan. From that moment on they became fashionable, and in 1901 the dramatist Frederic Soler Pitarra raised Els pastorets to the level of cult theatre with his work  El bressol de Jesús o en Garrofa i en Pallanga. There are many versions by other authors. Notable works include L'Estel de Natzaret (1903) by Ramon Pàmies, Els Pastorets o l'Adveniment de l'Infant Jesús (1916) by Josep Maria Folch i Torres and La flor de Nadal (1954) de Francesc d'Assís Picas.

As a general rule, the plot is based around three stories. The first explains the betrothal of Joseph and Mary, shows the couple looking for lodging, and dramatises the birth of the infant Jesus. The second revolves around the fight between the angels and demons. And the third, which is humorous and features folk traditions, recreates the adventures of the shepherds.

Nowadays, performances of Els Pastorets are staged all around the Catalan-speaking lands. Together with the Passions, these are the most deeply-rooted traditional plays. Around Christmastime in Barcelona performances can be found everywhere, put on by amateur groups and companies, which are usually attached to organisations such as cultural centres, civic centres and parish groups.