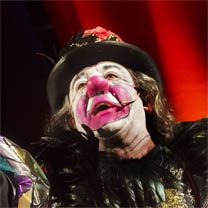 Rei Carnestoltes, the Carnival King, is a fictitious character who presides over all the Carnival events. His character and clothes symbolise the wild character of the festival, a break with the norm. He is usually dressed in an outlandish fashion and adopts an impulsive, impudent, irreverent attitude at all times. In Barcelona, as in many other cities, the King is played by an actor.

Normally he appears on Carnival Saturday, when the celebrations begin. He starts them off with a satirical speech covering some of the main events of the year and ends with a call for everyone to come together for some unrestrained fun. The rest of the days until Ash Wednesday he presides over masked balls, Carnival processions and other parades.

Then, on Carnival Tuesday he is tried and condemned to death for his misrule. After reading out his will, which is always imbued with the idea that people should lead their lives in a carefree fashion, he is burned in a public place. In this way, the Carnival King is used as a scapegoat, to show that Carnival is over and Lent has begun, that is, seven weeks of austerity and abstinence.